By living the modern way of life, our body is exposed to countless amount of chemicals and environmental pollutants, so it is no wonder that the popularity of detoxification is rising sharply. Instead of sonorous but scientifically questionable detoxification treatments, it is much more rewarding to support the health of our main detoxifying organs, the liver and the kidneys, but bowel cleansing, lung clearing or blood vessels “unclogging” can also help our bodies.

How often and when should we hold a cleansing cure?

For a healthy person it worth to have a cleansing treatment even twice a year. This can be planned to start after a holiday, since people usually drink more alcohol on vacation than usual, which puts a burden on the liver. It is also more difficult to say no to street fast food and local specialties, and eating irregularly can upset the balance of our gut flora.

It is advisable and also recommended to have a detoxification cure after antibiotic treatment, in case of intermittent or regular medication use (e.g. acetaminophen used against the common cold slows down the cleansing function of the kidneys, thus toxins may be excreted in a decreased rate) or for those, who smoke or drink alcohol on a weekly basis. Consumption of illegal drugs is also likely to cause liver and kidney problems, as they can contain a lot of impurities or by-products with unknown effects.

For cancer patients, it is advisable to use detoxification after chemotherapy or radiation therapy, as most conventional chemotherapeutic agents, although they accumulate mostly in tumor cells, also poison the body. Many, who have undergone chemotherapy suffer from liver damage or kidney failure - the latter can also be linked to serious kidney stone disease. In this case, the only thing to look out for is to wait at least 24 hours after chemotherapy, because if you start detoxification right after treatment, you may reduce the antitumor effect of chemotherapeutic agents.

Considering the regenerative capacity of the body and liver, as well as the condition of the body, the duration of a herbal treatment is usually recommended to be 1-3 months.

The diverse role of antioxidants

When our excretory organs are under pressure, metabolism increases, thus oxidative stress elevates. Antioxidants are able to neutralize free radicals formed as a consequence of oxidative stress. Some antioxidants can also be considered a “fuel” for detoxification, for example glutathione can directly attach to the substance to be removed, facilitating its excretion. Other antioxidants help prevent liver cells from being damaged by reactive by-products formed during the breakdown of xenobiotics. 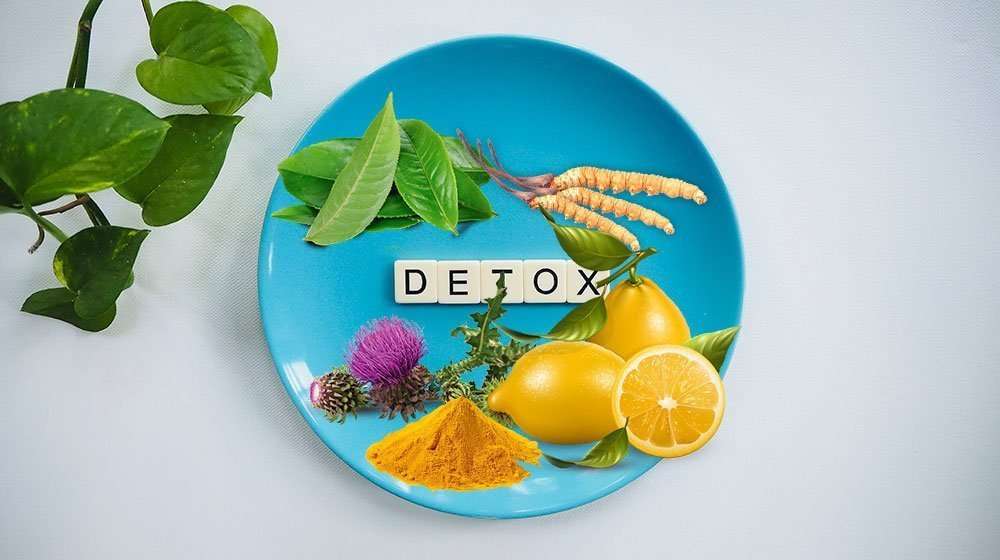 Herbs and antioxidants to support detoxification

Based on centuries of experience, folk medicine recommends such herbs for liver and kidney problems that have stood the test of time also according to today's scientific studies. The best known is the active ingredient silymarin extracted from the seeds of milk thistle, which is suitable not only as a dietary supplement, but also as a medicine, and can also help in liver diseases of various origins. Herbal use also depends on geographical location, e.g. while dandelion root has traditionally been used favorably in Europe for kidney problems, in the Far East, medicinal mushrooms like Cordyceps sinensis (caterpillar fungus) or Cordyceps militaris were applied.

The 4-week-use of glutathione made the UV-radiation caused skin pigment spots lighter, and reduced wrinkling and pore dilation in a Thai study. Those, who consumed glutathione for 12 weeks noticed enhanced anti-aging effects and further improved skin hydration. A similar test was performed in the Philippines: the use of glutathione made skin tone more even on both cloth-covered and uncovered skin. The mechanism of action of glutathione is complex. Briefly, it is capable to facilitate the production of a lighter-colored melanin, making darker skin spots less visible.

N-acetylcysteine, which is also an antioxidant, can have a similar effect to glutathione (see also at section ‘Kidney, Liver’), because after entering the body, part of it is converted to glutathione, which can help lighten liver spots, freckles or the pregnancy mask. The skin lightening effect of glutathione and N-acetylcysteine is further enhanced by curcuma and vitamin C.

3-5% of chronic renal failure results from overdosing painkillers, because the emerging oxidative stress during the breakdown and excretion of drugs containing paracetamol or ibuprofen can harm or even kill kidney and liver cells. N-acetylcysteine is routinely used in several countries to treat intoxication with painkillers. N-acetylcysteine is an antioxidant, which successfully counteracted elevations in liver enzymes and also supported renal function in experimental rats with paracetamol overdose. As a result, fewer cells died in the kidneys, and signs of regeneration were found.
Kidney function is also supported by the Cordyceps sinensis Tibetan caterpillar fungus. In a renal fibrosis model in rats, the caterpillar fungus successfully inhibited the excessive and pathological collagen accumulation during renal injury.

Silymarin supports the detoxifying function of liver cells. For example, the toxic compound called benzo(a)pyrene is present in small amounts in tobacco smoke or smoke-exposed grilled foods, which increases the risk of developing cancer and can also lead to nerve damage. Supported by silymarin, liver cells can neutralize the harmful effects of the compound more effectively.

Fatty liver is caused most often by alcohol consumption, but non-alcoholic fatty liver is also becoming more common: obese people with high cholesterol level and diabetic patients are more likely to suffer from it, which is consistent with the fact that in experimental animals, unhealthy, fat-rich food can trigger fatty liver disease. Unfortunately, some medications (certain corticosteroids, antidepressants, tamoxifen) can also cause fatty liver.

In one study, patients with non-alcoholic fatty liver disease took one of the main components of silymarin , called silibinin, and vitamin E for one year. As a result, a significant proportion of patients had decreased levels of liver enzymes related to hepatic impairment (transaminase: AST/GOT; gamma-GT) in the blood plasma, and the degree of inflammation and hepatic fibrosis associated with fatty liver was also reduced. In another 1-year-study, ALT/GPT liver enzyme levels were lowered with the combination of vitamin C and vitamin E, which also prevented the worsening of fatty liver and fibrosis in patients. An 8-week long intake of curcumin also led to a decrease in liver enzyme levels, triglycerides and cholesterol.

Based on laboratory and animal experiments, silymarin has been shown to inhibit the development of liver tumors (hepatocellular carcinoma) by interfering with chronic inflammatory processes and neutralizing the damaging effects of free radicals on DNA. Moreover, silibinin can improve the quality of life in patients with liver cancer treated with sorafenib.

Hepatitis virus infection leads to chronic liver damage. During the treatment of patients infected with hepatitis B virus, it has been observed that the use of silymarin in addition to antiviral agents (lamivudine, interferon) reduced serum levels of AST and ALT (also known as GOT and GPT) liver enzymes, and lowered the markers of hepatic fibrosis, thus the authors recommended the consumption of silymarin for Hepatitis B patients. A flavonoid called quercetin has been found to be safe in a phase I clinical trial for patients with hepatitis C, and there has been a trend-like reduction in viral load in those, who were treated.

The development of fatty liver is partly related to the condition of the intestinal flora. Through metabolic changes, the overgrowth of certain intestinal bacteria can make patients more prone to this disease. In an experiment, where mice were fed with a diet containing kombucha tea, the proportion of Lactobacilli (lactic acid bacteria) increased, and consequently, the process of fatty liver formation was hindered – as authors said. In addition, the glucuronic acid content of kombucha can also contribute to the removal of xenobiotics from the body through supporting the body's antioxidant and detoxifying systems.

Cordyceps sinensis polysaccharides also contribute to the maintenance of normal intestinal flora. In one experiment, mice were treated with a chemotherapeutic agent called cyclo-phosphamide. As a result, not only their immune system got weaker, the balance of their intestinal flora was also disturbed. Consumption of caterpillar polysaccharides has led to an increase in the proportion of probiotic “good” bacteria (Lactobacillus, Bifidobacterium, Bacteroides) and a decrease in the proportion of “bad” bacteria (Clostridium, Flexispira).

Resveratrol, an antioxidant also found in red wine, can inhibit the development and worsening of atherosclerosis. Due to its effect on the cells of the vessel wall, it can also improve the condition of blood vessels, thus lowering blood pressure.

If you want to browse and search our articles on the topic, click...
Detoxification
Tag